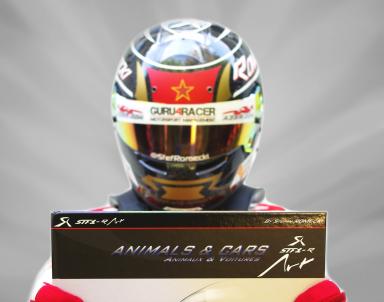 Stefan Romecki presents " Animals and Cars " his first book. Stefan has had the honor to have the foreword signed by for Yves Courage, real Legend of the International car-racing

No biography nor of long reading to be planned, but rather of the visual pleasure if you appreciate the Art and Cars...

How a car would look like if, to create it, we were inspired by a grasshopper ?

Stef answer that question with numerous very different animals from each other, what gives a rather unexpected result.

The foreword is signed by Yves Courage.
29 Morphogenesis in 5 categories:

There are 96 pages in English and French

It's with pleasure that the race driver and designer Stefan Romecki proposes you his artistic vision of the question, mixing technics between hand work, computer-assisted work, and made in a funny way or a realistic way

Ready to support our athletes with us?

Find us on FB